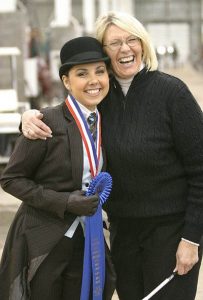 A lifetime of training, teaching and selling champions

Sandy Sessink is a world renown Morgan trainer and equitation instructor who began her career at the famed Carousel Stables in 1974, the largest Morgan show barn in the country at that time and home of many World Champions. For over 20 years, she owned and operated Old Orchard Farm in South Lyon, Michigan, turning out such well known riders as Rebecca Kelce Gruenberg, Mary Carlton, Jessica Cavanaugh, Stacy Hennessey and countless others.

She is a popular clinician around the country and is also the Show Manager for the very successful Buckeye Challenge Morgan Show in Springfield, Ohio. In 2016, Sandy spearheaded a highly attended “Day of the Morgan Horse” in Ohio for the Ohio Morgan Horse Association, which has recently been picked up as a National Day of the Morgan by the American Morgan Horse Association. We are very lucky to have Sandy’s wonderful life experience on our panel of writers.